Master Of The Fallen 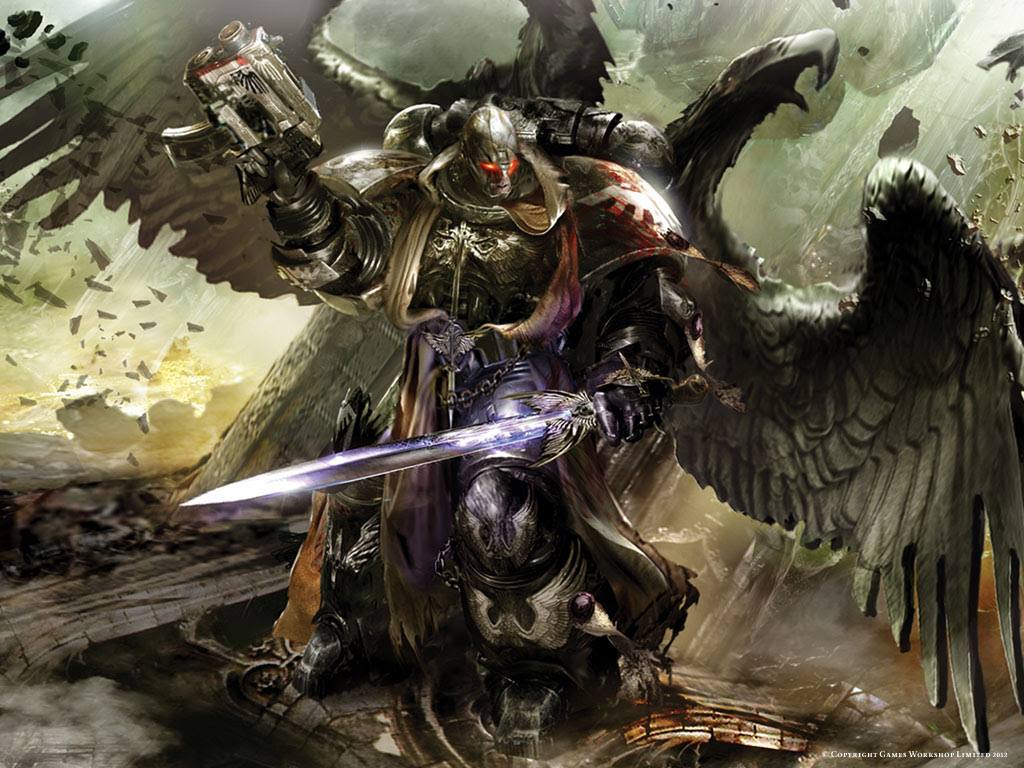 So finally, I have chosen the new army. I always wanted another Marine army. I like the basic solid feel to the army even with my inability to pass an armour save!!

The second thing is i get 2 armies out of this. First up i will make a list via the DA codex and then via the Chaos codex. I really like painting robes and so i will make all the normal marines out of DA vets, the new Terminators are very cool and i have a couple of conversions planed and i finally get to build the Cathedral Landraider i've had planned like forever...... 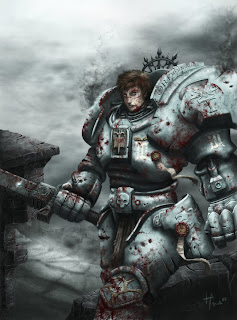 Evolution of a thousand cuts

Okay so i have developed my Grey Knight list over the last couple of months. I have played a few games and things are going well. This army came about due to game 5 of Botch.

I was playing a Blood Angels player and i had my army opposite his and i noticed that in the 2 turns of shooting before combat the only guy's i killed were Melta gunners and Vet Sergeants!

Basically, wound allocation is a killer. If i could cause enough wounds then he will eventually fail some. While hardly ground breaking news i thought that having a build based on this might be interesting.

He is in there to help protect the army. Shrouding is his main power. He will stand in the middle of the army and grant it a 3+ cover save. His hood will also be great for stopping powers. I have taken a lot of powers on him and i dont expect to use them all however i would be annoyed if i had not taken them and then needed them later on.

He is in there to allow me to take the henchmen and provide the skulls. These will be used to stop scouts and infiltrators and perhaps help with the deepstrike issues. He will lead the Henchmen unit to provide the cover in front of the army and give them Ld10 and Stubborn. This unit will be used to take the initial charge and the Rad and P'Toke should help with this. I gave him Communion to help  with reserves and in bore draw i can put this unit in front of my objective, deep strike half a squad using the mystic and he can help ward off tanks with the Combi Melta.

The main combat unit (in terms of actually wining a combat). They are I6, have the 2 best combat powers in the codex (IMO). They will chip in with both anti tank and anti infantry and i think they are awesome for their points. They will sit behind the henchmen and be used to counter charge nasty stuff.

As this is an all infantry list it is unlikely that i will ever get the first charge of the game off. This unit is vital for 2 reasons. First, it will be a good speed bump. Most of them have a 3++ save and this is the reason i don't have death cults in the unit. It is there to survive and that's it. Second, They have almost no shooting so they are not a priority for my opponent. After all what are you going to shoot at? The GK's, or the unit walking in front that give them a 4/3+ cover save? The 2 acolytes are there because i needed AT to ward off tank shocking tanks late on and the Mystic is for the deepstrike onto my own objective trick

These are the main stay of the army. GK's IMO are not really a combat army. They can do combat and they have combat specialists however strike squads are not amongst them! together these 3 units can pump out 48 strength 5 shots per turn and between 12 and 24 strength 7 rending shots per turn. They only have a 24" range and this will be a main problem of the army as a whole. However to counter this i have the option of deepstriking and combat squading if required! They can hopefully handle tanks and dreadnoughts (Sean will be putting this to the test soon enough). In killpoints games, if i roll a 5 or 6 (will never happen) i can even make these units re-roll 1's to wound. I played against Lee's Bangle army and the amount of fire power these units can put out is fantastic.

Basically see strike squads above. They solve a lot of the movement issues for the army.

Weaknesses of the army.

Anti tank - I only have Psycannons for this job in the shooting phase. They are better (statistically) than lascannons however they are not reliable.

Short range - My guns only have a 24" range. I need to be aggressive and keep moving towards armies that sit back.

Manoeuvrability - Walking marines don't move fast. Objectives that are far away can be out of reach. Hopefully deepstriking and the interceptors can do the job.

Strengths of the army.

Numbers - Go on, kill 48 marines and a terminator Libby! It can be done, but it's not easy! Even the henchman unit will be tough to be put down.

Anti infantry fire power - I have a bucket of it. Lee's (local player)  Bangles have FnP and even they took a pounding. It's about getting those units down to a more manageable size. Also because of the number of wounds i cause, i can get rid of vital models in the unit like the sergeant with fist extra.

Warpquake - Do not deepstrike against this army. I can cover most of the board before you get anything on.

All infantry - There are not many armies out there like this. Most people in a tournament wont be expecting it. It's not a net list and as i don't have any tanks it mean that all those AT weapons only have infantry to shoot at. Hopefully most of this will have a 4/3+ cover save from the henchmen!
Posted by Martin Moffat at 18:21 No comments:

Ok so i have finalised the list for Botch and i'm a bit worried!! I have had a look at some of the lists being posted and all of a sudden my ass is flapping like a barn door in a hurricane!! So here it is:- 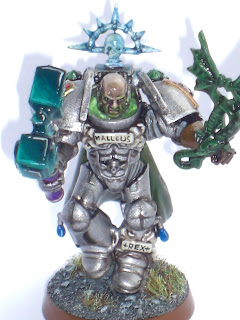 Ok, so im not the greatest with a camera but i think you get the Idea. Here is a couple of shots of my Inquisitor Corteaz! 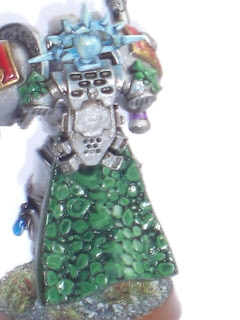 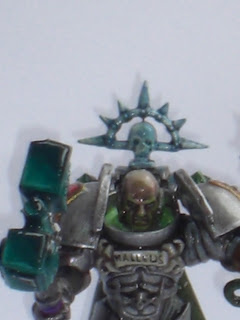 I've tried to paint the hammer as a jewel and instead of a big bird, he has a Dragon (which keeps in with the theme) He also has Chaplain Xavier's Salamanders cloak.
Posted by Martin Moffat at 15:17 No comments:

So, with Neil persuading me to go to Botch this year i have decided that an Inquisitorial army is what floats my current boat. The list is to follow with pic's of the new models. However the release of the new Grey Knights codex looks just the ticket. So far:

The acolyte's are to be made of SM scouts and with a little help from Victoria Lamb's miniatures, some kilts!! Very Scottish! lol
Posted by Martin Moffat at 20:58 No comments:

A Lord in waiting! 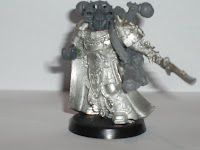 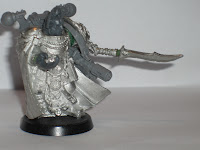 Here is the first look at my new Lord of Slaanesh. Still very much a work in progress.


Components used so far;-
Head off a Sanguinarian Guard
Body from Sicarius
Left arm from Huron Blackheart
Weapon from the fantasy Slaanesh champion
Combi-melta and strap are from the Marine character sprue
Daemonette claw 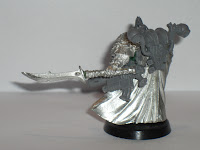 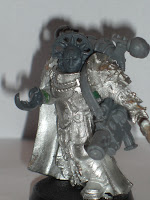 Next onto the green stuff and cleaning up what has been done so far.
Posted by Martin Moffat at 16:15 3 comments:

Okay so here are the lists. The armies are almost identical however as i get more stuff in the Slaanesh army by 4 marines!

Email ThisBlogThis!Share to TwitterShare to FacebookShare to Pinterest
Older Posts Home
Subscribe to: Posts (Atom)
My Blog of random wibbleness!!

Martin Moffat
Hailing from Glasgow. I have played 40k for over 20 years! I have been attending the former GWGT every year since 2003.